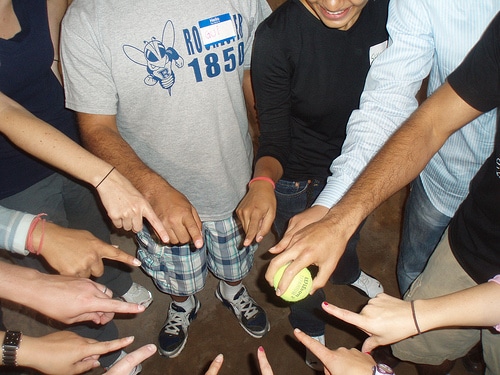 As project managers, we are all familiar with Bruce Tuckman’s team development model and the phases of forming, storming, norming and performing.  You may not realize you’re going through Tuckman’s model when a team first forms, but understanding the stages helps rationalize the initial politeness, eventual conflict, stress relieving agreement and realized fluid team performance that all teams undergo.  It is a natural cycle of team development that everyone experiences even if you haven’t been through a formal organizational behavior course.  Team can struggle in each of the various stages and this article shares a couple of key lessons learned as they formed, stormed, normed and performed.

The forming phase of the project team is the “feel good” stage of the team development where each person learns about the team members and first impressions are made.  It is an easy stage to start out in because no one wants to raise any conflict or threaten specific authority.  Of course not much gets done in this team formation phase but it is important to recognize the need for team formation.

My goal in the forming phase is to develop rapport with each of the team members.  Learn some interesting facts or personal information that may uncover a common bond.  Project schedules and status reports may help manage projects but relationships deliver projects.  By building rapport quickly with your team members, you can leverage those common connections when the storming phase begins.

The forming phase can include a variety of structured and unstructured events ranging from getting coffee, going to lunch or hosting a dinner outside the office.  It doesn’t need to be a lavish event although those types of events are fun to attend too.  A few years ago, my director personally bought the entire army of consultants and employees Detroit Tiger tickets for a local home game.  That night forty people attended a game, had a great time and build rapport with each other.  This was an extremely generous and personal investment in the project.  When I asked why she bought the entire group tickets, she simply said “It had to be done”.

You don’t have to do something as extravagant but I think you get the idea.

Storming inevitably happens so you might as well as dive right in and get it over with during this time period.  As the project team begins to execute and form different opinions, the team will experience conflict.  Role confusion, boundary definition and working in a company’s political hierarchy can all contribute to conflict and frustration in the Storming phase.  Storming will inevitably happen so you might as well as embrace it and have a plan to respond to conflict with your team members.

My plan is simple.  When conflict arises, find the appropriate time to address it one on one with the individual.  As a project manager, you need to treat a disagreement or stress between two team members as an issue and simply acknowledge it.  By stating the issue and acknowledging it with the team members, you can safely express your concern and both seek a resolution.  Addressing conflict can be uncomfortable but remember it isn’t personal – it is a project issue.

Ironically, I’ve found by going through the storming phase and experiencing conflict, I’ve actually developed stronger rapport with the individual and improved the relationship.  Some of my strongest relationships with team members resulted from a clear disagreement that was respectfully acknowledged and resolved.  If you ignore the issue and think it will go away, storming will only continue in hinder team performance.

In the previous article, I shared a couple of key lessons learned in team development using Bruce Tuckman’s model of Forming, Storming, Norming and Performing.  Every team goes through these four phases regardless if the team recognizes it or not.

If the team can apply the lessons learned in the forming and storming phase, the team progress faster to the norming and performing phase.

Lesson Learned:  Identity and communicate expectations in the Norming phase

Its difficult to achieve the Norming phase, if the team doesn’t communicate or share expectations for team norms.  One method for communicating, discussing and achieving team norms is to host a kick off meeting with the immediate team and share how status reports will be collected, the cadence of key meetings and how teams should work together.  By communicating expectations, the team can agree on working practices.

Another example involved reporting milestone with the standard “traffic light” approach – red, yellow and green for key milestones.  Green was used to identify on-track milestones, yellow for at-risk and red for late tasks.  The business customer was used to using blue for on target, green for complete and red for late.  After using the original traffic light status reporting, the team had to switch to accommodate the business customer’s expectations and own standards.

Team norms are often established in the forming phase although it may take several iterations to work out the “kinks”.  In the status reporting example, it took a few times to produce the status reports before the team understood the revised formatting and cadence.  You may find this experience when you conduct your first issue review meeting or your first program status meeting.  By establishing norms early, communicating them and adjusting norms based on team feedback, the team will achieve the norming phase much faster.

Lesson Learned: Identify and save best practices found in the Performing phase

In the Performing phase, the team establishes a rhythm for managing issues, responding to problems and executing work.  Status reports are submitted on time,  action items are appropriately tracked and roles are understood.  It may take several weeks to reach the performing phase and during this time, the team has likely created several best practices and expected team norms.

You don’t have to wait for a lessons learned session at the end of the project to identify and discuss the best practices.  As the team experiences best practices that work well for the team, make a note of them and save them for expected norms for the next project and team formation.
One best practice my team established early on was the use of a daily stand-up meeting for all the team leads.  When the stand-ups were first conducted, they lacked structure and the team continued to ramble.  The team adjusted the practice of their stand-up meeting so each team member would highlight what they are working on and the top issues they were experiencing.  The work to resolve the team member’s issue and further coordination would happen outside the meeting.

These types of best practices can be documented in a single MS-PowerPoint slide and incorporated a kick off deck for future project teams.  Each slide can be removed or adjusted based on the project need and expected team norms.

Programs can be long term projects depending on the size and scope.  In a two to five year project or program, team members will fade in and out and as new team members are introduced and the natural phases of forming, norming and storming will happen again and again.  The key is to recognize the importance of these phases, embrace them and manage the issues as the team works on their projects.  Team development will inevitably have conflict and differences in opinion are healthy for team development.  Establishing norms is important for teams to achieve the desired performance.

For more information on Team Development

For additional team development activities and effective team building tips, check out the following articles. If you know teams are going to form and storm, it always helps to have a few resources help you get through the challenges.  Below are a few recommended books on building rapport and effective conflict resolution.

Facebook
Posted on July 4, 2011October 14, 2019 by Andrew Makar
Category: Project Management Processes
Sign Up For New Tutorials!
Project Management Tips
We use cookies to ensure that we give you the best experience on our website. If you continue to use this site we will assume that you are happy with it.OkPrivacy policy